Showing posts from August, 2015
Show all

All Quiet on the Railway Front 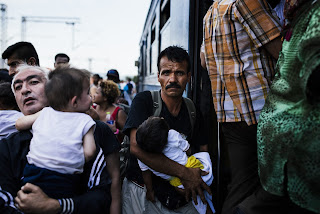 Living between Europe and America the last three years I was thinking that you can’t really understand America without recognizing the centrality of the car in the lives of Americans – in a country where a driver’s license serves as an identity card. On the other hand you can’t understand Europe without remembering the centrality of railways and trains in its modern history: the industrial revolution; urbanization; a continent ‘united’ in its linguistic fragmentation through railways; WWI; WWII; the Holocaust; the post-war European economic miracle; the Cold War and a divided continent (old railways ended at the borders of Communist countries as a dead end); the European Union and a borderless continent again – just as it was before 1914. Trains and railways symbolize Europe’s booms and dooms, its most shining as well as its most gloomy moments. In the last few weeks, children, families, refugees from the Middle East are embarking in a painful and hazardous journey through Europ
Post a Comment
Read more
More posts