Showing posts from August, 2012
Show all

History and hysteria: The private libraries of dictators 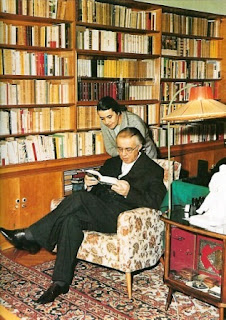 The Albanian dictator Enver Hoxha and his wife loved to show themselves before their huge private library. If you zoom the picture and manage to read the titles of the book you should know that at least 90% of them were banned for the "ordinary Albanians"... In 2009 I found myself again in Albania, doing some research on the lifestyle of the “Party leaders” during the communist regime. I was surprised to discover, among other things, that books and private libraries played an important role in Hoxha’s court. I was astonished by the fact that some of these guys, who systematically destroyed libraries and book collections, were also great readers and book collectors themselves. They even used to compete with each other, comparing the size of their private libraries. Enver Hoxha himself possessed an astonishing private library with almost 30,000 titles, mainly in French, as he had studied in France in the thirties. Some of these books were, literally, stolen fr
Post a Comment
Read more
More posts